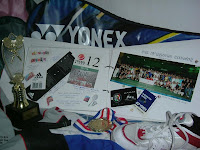 I love badminton. I almost mourn when I graduated in college, thinking I can never play it again especially when I start working. But I'm glad I was able to play 'til now with my co-workers and friends! I even had the chance to join some tournaments and able to get a handful of championships.
Here's a story of how I came to love the sport. I would say, accidentally. Why, you ask? Hmmm...during high school I'm very active in sports and I like volleyball the most. I didn't know that time that badminton was actually a competitive sport probably because I didn't hear anything about it on TV or radio, we never had badminton tournaments in our school and we only play it in the streets during summer afternoons.
Since, I was a player back in HS, I have a dream of joining the college volleyball varsity team. I tried out but unfortunately, I wasn't lucky enough to be selected. Frustrated, I tried badminton just to divert my disappointment and surprisingly, the coach told me I have the skills and so I was chosen. I'm happy because I never expected it(but still it felt like it would be better if it was the volley team).
(PHOTOS: MSI Smashers' Club)


And the training begins. I was taught the basics: footworks, hand-grips and shots. I was being prepared for the upcoming Sportsfest. We would go on my grueling routine 2-3 times a week. We would go to Camp Crame(National Police Headquarters) to use their facilities -free of charge(because she's a General's daughter)- and play doubles with some of the off-duty policemen. 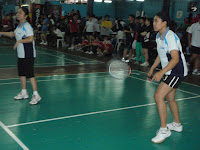 Then here comes the sporting event, poised to play in the semi-finals round but as a rookie, playing singles, I am still scared that I might disappoint the whole IT team if I lost. 'There is no chance I will win this game', I repeatedly said to myself, because infront of me is this tall, athletic girl in her senior, looking pretty confident to win the game. But the crowd were chanting my name, cheering on me each time I score a point...I feel excited, I needed to win!  And guess what, I won the match!(HAH! perhaps my opponent was just intimidated to my constant stare haha...she didn't know how nervous I am). That's the best feeling I ever felt since I graduated in HS!
My partner was set to play in the Finals, but we can't find her within the gym's premises. In 5minutes the umpire will disqualify us if we can't present our player on time. They have no choice but to let me play the game. I am not prepared for that match, obviously. I know how really good my opponent is, a graduating student who has trained so hard to finally get a well-deserved championship medal. I was the one who got intimidated this time around, but I can't lose without a fight... 3rd set... I lost...she won. I'm upset but realized it's her time not mine. My teammates ran towards me and hugged me, admiring how I put my heart into the court.

On my Senior year, I got my first Gold medal...in a hard fought battle. =) 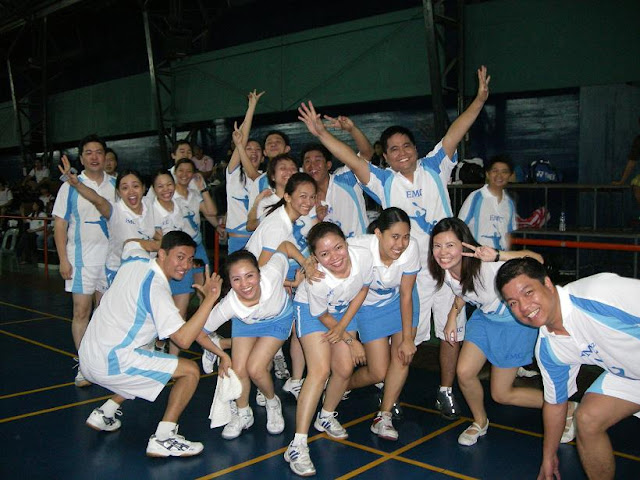 From that moment on, Badminton wasn't just a street game anymore...
Posted by Bugzy's Journal at 10:31 AM
Labels: Badminton, Fun Activities