What I learn today: My Hometown

"The Legend of Tayug". A brief history of this small town written by dad. 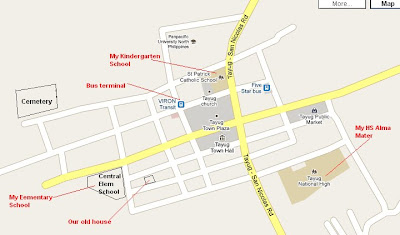 HOW TAYUG GOT ITS NAME: The origin of Tayug started when a group of brave and pioneering Ilocanos left their homes in search for a new land. In their wandering, they were attracted by an unusual tall bacayao tree majestically conspicuous even from a great distance away from over the rolling , grassy plains. Curious, they went nearer the tree, and discovering the richness of the surrounding, they decided to establish their settlement in the place. They cleared the land and here, under that bacayao tree, they built their new homes. At once, they called the place "LAYUG " which means "tall" in the Ilocano dialect, in reference to the tall "bacayao" tree which has become the distinguishing landmark of their new settlement. In the course of time, however, the name LAYUG was changed to TAYUG for the convenience of pronunciation. Today, that little settlement, then called LAYUG, is now the MUNICIPALITY OF TAYUG.