One of my closest friends, Den, came over from Dubai for a short vacation and one of her itineraries is to have a little gathering with some of our childhood friends. I have been waiting for this day since we have planned it last June but a day before the schedule I thought I couldn't come because I was so sick but gladly, I felt better the next day and was able to go.

Irene, the Business Analyst, fetched me at 7-11 in Pantranco-Roces. We arrived in our meeting place-ABE Restaurant at the 3rd level of Trinoma-30mins late the 7 o'clock meeting time. Joanna, the Fashion Designer, was already there, alone. After a while, each of the guys are coming in; Den, the Travel Agent; Edson, the Journalist; Hyacinth, the Lawyer-together with her younger sister Hanel-then came John, the IT Specialist; Rheena, the English Professor and lastly, Steven, also a Lawyer. We're looking forward to see Znarf, our mysterious elementary classmate, who we figured out, just recently that he turned into a fine looking man!. Sadly, he didn't showed up. 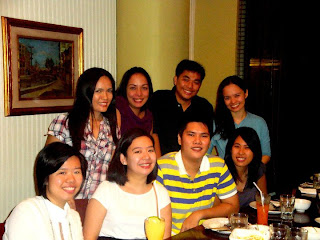 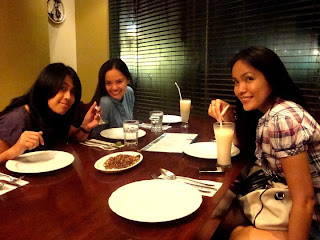 The dinner was fantastic because aside from the food being so delicious-Pork Sisig, Pinakbet wen manong, Sinigang na Bangus, Calamares and my personal favorite-the Lamb Adobo topped with crunchy garlic flakes-it was also a treat by Den. Hehe... 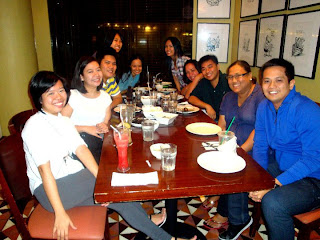 The mall and resto was closing so we decided to move to another location. We can't make up our minds because others wants to have coffee while others wanted to drink. Our first choice was UP Techno-hub but as soon as we get there, we changed our minds and just went to Eastwood.

We ended up mingling with party people, Eastwood was a bit crowded but we've found a vacant, not-that-much-noisy open area infront of Pasto Italian Restaurant. We got our teas and mozzarella sticks while others had their drinks. Thank God it didn't rain! 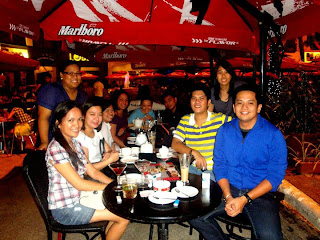 Reminscin' continues as Rheena recalls the most famous anecdotes in elementary and HS. We had such a good laugh! We also talked about those we haven't seen since then and those we have heard about recently. Everybody seems to have a great career and love life(hmmm...for those who have love life hehe). Steve and I also found a little time to talk about our dear friend, Mac. He also told me he's going to US on October for his sister's wedding. Steve and Mac plans to hang out together to celebrate their birthdays(they're going to watch an NBA game), how i wish i could also be there. 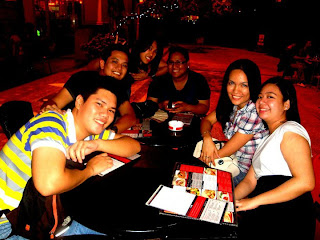 There were tons of good news but there were also some bad news; John's parents were caught in a car accident just a few weeks ago. They have sustained multiple wounds and bruises but thankfully, they are not in a critical condition(aside from his dad's hand needs surgery because of damaged knuckles) and was now getting better.

We even saw my brother, also hangin' out with his own set of childhood friends.

As we welcome Den's homecoming, we've learned that the night out also served as a despedida party for Edson. He already resigned in the Daily Inquirer and he's flying out for US on Saturday and will be back in three years time. We'll miss him for sure.

We called it a night by 2:30 am(10:30 pm at Den's time-Dubai Time). Irene fetched his boyfriend, Jon, in ABS-CBN and dropped me by at my apartment afterward.

It was great having a chitchat with these people, i hope we could do it more often but i guess we need to wait for another good time where most of us could come.

Thanks to Den for the treat and also for Irene for the ride. Hoping to see you all soon again! =D
Posted by Bugzy's Journal at 9:18 AM
Labels: HS Friends